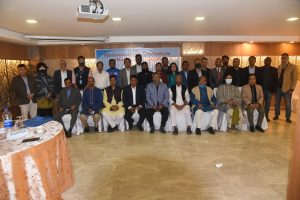 A sensitization meeting was held on Saturday, February 19, 2022, at Lakeshore Hotel, which was organized by the Center for Law and Policy Affairs-CLPA, IDLO, and Citizen Network on the Role of local government to promote healthy diet and physical activity in reducing NCDs. The keynote address was delivered by Professor AFM Sarwar, Research Consultant, and Syed Mahbubul Alam, Secretary, of the Center for Law and Policy Affairs-CLPA. Forty-Three (43) participants (38 M, 5 F) attended the event.

Speakers said that it is possible to play an important role in protecting human health through urban planning. Urban planning includes workways for walking, safety and priority for pedestrians, lanes for bicycles, parks, open spaces and control of free movement of all. Physical activity can be enhanced by making exercise compulsory in educational activities, ensuring teachers and materials for exercise. The Field, Parks and Natural Resources Conservation Act 2000 and local government laws are relevant. It is possible to ensure the benefits of manual labor in the city by empowering the local government.